My Review Of “All American Horror: Gateways To Hell” 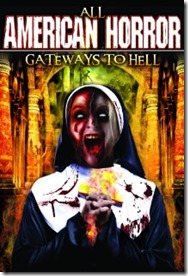 “All American Horror” is a documentary containing some of the most notable and some not-so-notable locations of paranormal activity in America. In Ashe County, North Carolina there is Devil’s Stairs. A place that residents say ghostly phenomena of women, crying babies and even Lucifer himself manifest. Then we get Gallows Hill, a place where spirits still roam in torment from the atrocities of their lives. They say that no one has still been able to spent a whole night inside the home, which is now a small business office. Following that segment we explore a woman in N.Y., who turned her property entrance into a portal to Hell, when she refurbished some old cemetery gates. After the Gates we take a trip to one of my favorite spots-Waverly Hills in Kentucky known as The Haunted Hospital. The hospital leads into the scary legend of the woman in the tunnel. An apparition who terrorizes anyone foolish enough to explore the location.

“All American Horror: Gateways To Hell” is a pretty mediocre documentary. It isn’t really bad or pointless but it barely offers anything fresh to the legends it explores. A few of the locations are heavy traffic spots for paranormal investigators and tourists alike. I venture to say that there is nothing new in this docu that really adds to those tales. The segments dealing with the woman of the tunnel, the cemetery gates and Lucifer thumbing a ride are all very creepy and entertaining to watch. They are also less explored than the other ghostly hot-spots. My biggest irritant was the fact that some of the interviewees and people highlighted seemed a bit scripted or too far fetched to be credible. If you really like documentaries about the paranormal then give this one a peek but I personally wasn’t all that impressed with what it offers. I do have to give credit to background atmospheric shots, of the locations that worked into the segments, because they were creepy and eerie visual treats.
Posted by A Southern Horror Fan