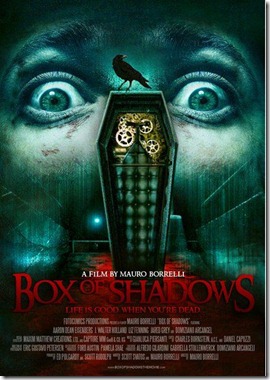 “Box Of Shadows” is a supernatural thriller that also has the title “The Ghostmaker” attached to the project. It depends on the country it is released to which one shows up. The film is directed by Mauro Berrelli and stars Aaron Dean Eisenberg, Liz Fenning, J. Walter Holland and Jared Grey. The story centers on a 15th century coffin with mechanical and very supernatural innards that allow a person to experience death for a set amount of time. In a ghost state the world opens up in ways that life could never allow. Only there are dark and fatale consequences to this devilish device. An apparition of death that stalks all who use the box tracks down the violators of nature and sets right the balance between life and death. The machine was created by the evil Da Vinci-esque figure Von Tristan. After a young college guy finds the coffin he and his buddies set out to discover the wonders and true value of the device.

The movie has your standard thriller set up. A mysterious object set against friends who are more like frenemies. The production and story are written well leaving most of the suspense and atmosphere of this dark story up to the actors and audience to allow for the scares. The scares are really more subjective to the thriller element of the film as friends turn on each other and the discovery of a darker more sinister figure attached to the machine becomes apparent. The film does have some serious and edgy elements to the story that make for a more personal connection and deeper back story to the characters than most films of this sort. The overall action driven suspense and friction between the characters allow the film to be better than you would think.

“Box Of Shadows” doesn’t offer anything new to the film that isn’t present in any other horror film. The characters are standard but just above cliché. The scares where minimal for me but the action and story were intense and dark enough with some real world edginess that I related to which held me to the film until the bitter end. The ending however was a bit cheesy but well deserved considering the intensity of the whole films multiple plots. I enjoyed the film and fill it is worth horror fans checking out.
Posted by A Southern Horror Fan