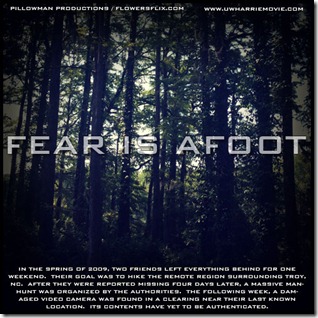 Picking up the newest wave of cryptid craze is the horror flick “Uwharrie” which notes it’s style of filming more of “guerilla” style than standard point of view or found footage. The film hopes to put the audience more centered into the story that unfolds as the film explores the most notable creature roaming North America. A contemporary horror film set in the Uwharrie National Forest. The  film is directed by Christopher Flowers and stars Danny Stiling, C.A. Daniels, Brandon Estes, Daren Horne, Jenn Greenawalt and Matthew Cole. Check out the trailer below then head over to the Facebook Page to keep up to date with this one.

“In the spring of 2009, two friends left everything behind for one weekend. Their goal was to hike the remote region surrounding Troy, NC. After they were reported missing four days late, a massive manhunt was organized by the authorities. The following week, a damaged video camera was found in a clearing next to their last known location. Its contents have yet to be authenticated.”