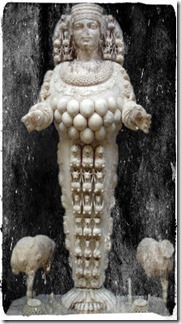 Matrailia is the ancient pagan festival of Mater Matuta. She is the indiginous Latin mother goddess. The Romans eventually made Mater Matuta equivalent to the dawn goddess Aurora, and the Greek goddess Eos. Her cult is attested several places in Latium, her most famous temple was located at Satricum. In Rome she had a temple on the north side of the Forum Boarium, allegedly built by Servius Tullius, destroyed in 506 B.C., and rebuilt by Marcus Furius Camillus in 396 B.C., and she was also associated with the sea harbors and ports, where there were other temples to her.

At Rome her festival was the Matralia, celebrated on June 11 in her temple at the Forum Boarium. The festival was only for single women or women in their first marriage, who offered prayers for their nieces and nephews, and then drove a slave out of the temple. They made offerings of flowers and often arrived at the temple carrying their relatives' children in their arms.
Posted by A Southern Horror Fan