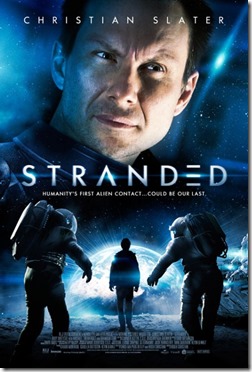 A new trailer has landed for Christian Slater’s “Stranded”. The sci-fi thriller directed by Roger Christian follows Slater’s character Col. Gerard Brauchman. Brauchman and his small crew find themselves battling for there lives and the future of mankind. The film hits theatrical release and VOD on July 26th and also stars Brendan Fehr, Amy Matysio and Michael Therriault.

When the isolated U.S. military moonbase is bombarded by a rogue meteor storm, Colonel Gerard Brauchman (Christian Slater) and his small crew are cut off from Earth with their life support failing. Before long, the crew discovers the meteors harbored alien spores…and they’re replicating. Now a vicious, shape-shifting predatory life form is loose inside the crippled facility, picking off victims one by one. Locked in a desperate fight for survival, Brauchman and the terrified remaining astronauts have one final mission…keep the creature from escaping the moon and finding a new food supply on Earth.