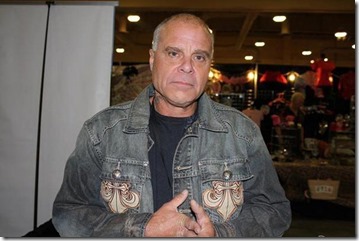 Horror icon Tony Moran stars in the upcoming film “Provoked” directed by Jordan Pacheco. I have an interview coming up with the legend-which will mark my first ever podcast-Kind of nervous about that. It will be my first time coming close “even if it is virtual” to Michael Myers and I don’t want to die! ; )  Anyway besides the paranormal thriller mentioned Moran has signed on for the second feature from “Provoked” production company Lock it Down Productions. The film is titled “Dead Bounty”. Read the details in the press release below.


FOR IMMEDIATE RELEASE
June 15, 2013
RE: Horror Feature staring Tony Moran - “Dead Bounty”
The team behind the much anticipated independent horror feature, “Provoked” (due to premiere Fall 2013), has a new horror feature in the works. Lock it Down Productions is excited to announce, “Dead Bounty” which will begin filming in the Fall of 2013.

“Dead Bounty”, Directed by Jordan Pacheco and Produced by David Langill, will star horror icon Tony Moran. Moran is best known for playing Michael Myers in John Carpenter's horror classic “Halloween” “Dead Bounty” follows a group of bounty hunters as they head into a vast New England forest in hopes to capture a dangerous fleeing felon. Closing in on their quarry, the group encounters more than just a murderer on the run when they are confronted with a seemingly endless horde of the undead. With no shelter, no help and no end to the carnage, survival seems hopeless.

Also Tony Moran is working on a documentary titled “Life of a Horror Icon: Tony Moran” which I have been told will be a very staunch look at the legend’s life. Stating to Langill that “nothing was off limits”. October 2013 marks the thirty-fifth anniversary of “Halloween” and Moran is as busy as ever. During the Fall, besides filming, Moran will be making several personal appearances throughout the New England area.
Posted by A Southern Horror Fan