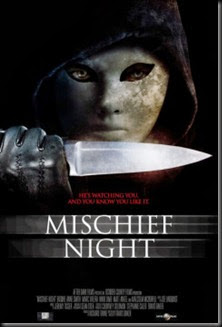 “Mischief Night” follows a teenaged babysitter who is stalked by a masked madman. In an unusual turn of events, when victim and victimizer come face-to-face, they begin to develop romantic feelings for each other. The film is currently available through Amazon for pre-order. Check out the trailer for this immediate holiday collection addition.