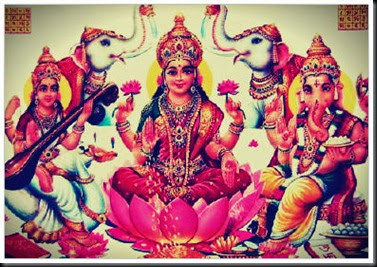 Akshaya Tritiya, also known as Akha Teej, is a holy day for Hindus and Jains. It falls on the third Tithi (lunar day) of Bright Half (Shukla Paksha) of the pan-Indian month of Vaishakha and one of the four most important days for Hindus. It is an auspicious day of the birthday of Lord Parasurama who is the sixth incarnation of Lord Vishnu. On this day Veda Vyas and Lord Ganesha began to write Mahabharata. The meaning of the word Akshaya is infinite that which never recede.

In Jain and Hindu calendars, some days of the month are absent in counting and some days (tithi in lunar calendars) come extra, but Akshay tritiya is one day which is never "absent" from the lunar calendar. The word "Akshaya" means the never diminishing in Sanskrit and the day is believed to bring good luck and success. It is believed that if you do charity on this day you will be blessed. On Akshay Tritiya, Mrutika worshiped.

In Hinduism, Akshay Tritiya was the day when Ganesha (Vinayaka), the god of wisdom and obstacle removal, started writing the epic Mahabharata to Ved Vyasa's dictation. This day is ruled by god Vishnu, the preserver-god in the Hindu Trinity. It is traditionally celebrated as the birthday of the Hindu sage Parashurama, the sixth Avatar (incarnation) of the god Vishnu. According to Hindu mythology, on this day the Treta Yuga began and the river Ganges, the most sacred river of India, descended to the earth from the heaven.