James Cullen Bressack has signed on to direct horror film “Squeal: Blood Harvest”, to be produced by Dismal Productions in association with MOnsterworks66. The film is currently in preproduction and scheduled for a 2015 release. The screenplay, written by Michael Hultquist (Arena, Victim) based on an original story concept by Seth Metoyer and Shannon Hilson, with Bill Oberst Jr. set to play the lead role as Uncle Ollie. 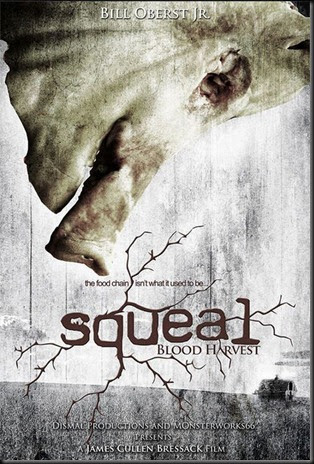 SQUEAL: Blood Harvest follows the story of young Maggie Crane and her brother Jake as they attempt to unravel the mystery behind Jack’s recurrent nightmares of squealing pigs. After a move to their Uncle Ollie’s farm, Maggie and her camera further explore the dark and sinister foundation of her brother’s fears to the tune of chilling revelations.

Bressack has become synonymous with Indie horror, both visceral and psychological with his film's such as "Hate Crime" (kick ass movie that had me cringing the whole time), "To Jennifer", "13/13/13" and "My Pure Joy". He has also been active in the production of a series of horror anthologies focused on showcasing other up and coming
indie horror filmmakers.

Bressack's Twitter account has recently achieved 'verified' status, which is almost unheard of for an indie film director. His official Twitter page can be found here here
Posted by A Southern Horror Fan