Website Launches For Indie Series ‘A Seat On A Train’ 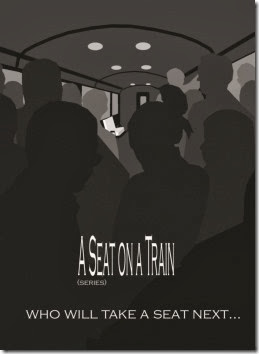 One of the best new series to come along in a great while, ‘A Seat On A Train’ has officially launched it’s website. I recently screened the first episode “Out Of Place”, and I have to say that the series is a modern take on the surreal theatre of classic television shows like ‘ The Twilight Zone’ and ‘Outer Limits’. The writing and visual style to the show is mature, entertaining and creative, showing both originality along side it’s celebration of classic inspiration.

The first episode of ‘A Seat On A Train’ –“Out Of Place” debuts on Halloween through many digital media outlets and is a series that I personally do not plan to miss. I encourage all to tune in to this twisted and macabre world created by Daniel MacMunn. The first 5 visitors to the website, who sign into the contact page, will get a full DVD package including the 1st episode, extras, train ticket and a booklet describing the first season. Read the official press release to get all the details below.

It's October 1st and in the spirit of our great nation's month of horror, "A Seat on a Train" is launching it's website, which will feature the 1st episode, "Out of Place" on Halloween 2013! So please, come and let us creep you out this scary holiday... also find out about future episodes...  Most of all, come and experience the release of "Out of Place" on Halloween! 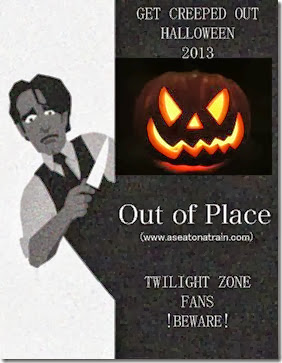 After a year of festivals and awards, "Out of Place," the 1st episode of "A Seat on a Train," is ready for its world wide release!

If you love "The Twilight Zone" then you will become an instant fan of "Out of Place!" The release will happen online, Halloween 2013, showing all day and night, on our website- aseatonatrain.com for free and other medias- Facebook, Vimeo, You Tube and IMDB.


"Out of Place" blends the psychological thriller with the classic surrealism and sets stage for some truly dark melodrama to come from future episodes. The acting is superb, with characters that are believable and emotive..."- review from asouthernlifeinscandaloustimes.blogspot.com
(Link to full review- http://asouthernlifeinscandaloustimes.blogspot.com/2013/09/my-review-of-pilot-episode-of-seat-on.html)


Out of Place synopsis- Spencer is fixated on keeping everything in its exact, specific place. His obsession is so extreme it has cut him off from the outside world and is now threatening his five-year relationship with his girlfriend, Samantha. After Samantha walks out on a romantic dinner he has prepared, he soon becomes a victim of his own obsessive behavior when random objects around his condo mysteriously shift out of place when he's not looking.


Link to "Out of Place" trailer- www.aseatonatrain.com


Director/Writer Daniel MacMunn explains where his passion comes from- If you love "The Twilight Zone" then you will be an instant fan of "Out of Place." I have always been a huge fan of Rod Serling's hit classic, creepy series from the early 1960's. Many people have tried to duplicate this series but have fallen short in my eyes. "Out of Place" is the first episode of a series I created called "A Seat on a Train." I don't want to copy Rod Serling's genius, but pay homage to it. I believe my ideas and skilled writing will bring back that great old style of story telling, while piquing the interest of the modern day viewer. I have written many other episodes, ready to be filmed, that pertain to our modern times. "Out of Place" is the first brave attempt of this series. It was shot very low budget, in one location with two characters. It has that creepy style of filming with original music enhancing the story. I hope "Out of Place" will be the kick start into a long run of "A Seat on a Train."


A Seat on a Train description- A single seat on an old train has a very peculiar talent. For when a passenger sits, they're warped into another reality where they're confronted with major flaws, concluding with a twisted lesson at the end.


Future episode descriptions-
The Perfect Woman (Episode 2)-­‐ A successful, good-­looking businessman, Andrea, discovers an odd solution to nagging women in relationships. He buys a real life sex doll, a doll that looks and feels like a woman but is not real and most importantly, can't think. But his perfect world is shattered when the doll begins to talk and make demands.


Death Behind the Door (Episode 4)-­‐ At an séance, a cynical Tristan is told by a psychic that there will be three knocks and death will be behind the door. Tristan dismisses the prediction but becomes increasingly wary when his friends' fortunes start to come true.


A Story To Tell My Grandchildren (Episode 5)-­‐ A retired Janitor, Morgan, wishes he could go back in time and pursue his boxing career so he would have better stories to tell his Grandson. But he will soon discover that a wish doesn't always bring the future you expect.

Now we are ready for the public release. What we are trying to do here, is to get as many people to view "Out of Place" on Halloween and after. Our goal is 100k views. We know this is a lot but feel this concept is very marketable. In conclusion we hope to gain enough of an audience so we can show the networks how popular our show is and hopefully get picked up in the near future.

In the collaborative spirit of film making, we have launched our own crowd funding campaign to help finance our next episode "The Perfect Woman." To obtain funding we will be selling DVDs and posters offered after the viewing on Halloween and all other efforts will not take place until the day of the release. We also will be offering incentives to anyone who helps us get the word out, including a DVD package, exposure on our Facebook page, IMDB credit and advertising on all of our other sites. We are also open to any suggestions you may have.

In the near future, we hope to collaborate with undiscovered, talented writers, actors and directors just like Serling did. We want to honor Rod Serling by continuing his great vision, creepy themes and unique story telling. Most of all, we want to help launch careers of these artists while entertaining and creeping out a large fan base with original stories that pertain to our modern times.