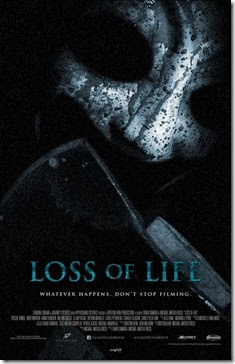 A release date has been set for survival horror “Loss Of Life”. The film is directed by David Damiata and Michael Matteo Rossi. It stars Reggie Range, Niko "Ace Primo" Warren, Randi Borden, Melvin Gregg, Elijah Vegas, Trevon Morales, Chris Petrovski, Charlie Glackin, and Chris Tyler Link.  “Loss Of Life” hits VOD Digital and DVD on October 25th. All of which are available for pre-order at the film’s website.

On October 31, 2012, in North Hollywood, California, a group of high school friends decided to document their Halloween night out. What they end up documenting is a horrific bloody attack that quickly becomes the worst night of their lives. This film is the compilation of the footage found that night.

Mance Media will be releasing the film for sale in the US across all major digital services, including XBOX 360, PS3, Amazon Instant, Vimeo VOD, ROKU, and TiVo, and on demand services, including AT&T U-Verse, Verison Fios, Charter Cable, and CableVision.