Check Out The Teaser For Demon Fantasy “Interpreter Of Signs” 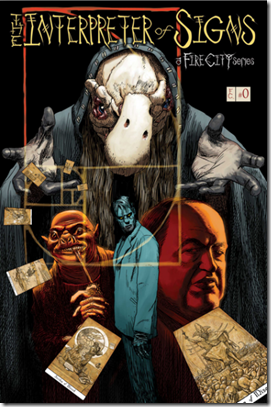 “Interpreter Of Signs” is a demon fantasy noir directed by award-winning character effects creator Tom Woodruff Jr. in his directorial debut feature project. Earlier Woodruff gave fans a taste of this dark surreal world with his short film “Fire City: King Of Miseries”. “Interpreter Of Signs” is  set against the noir backdrop of FIRE CITY, a shadowy atmospheric world, where demons live among humans who can’t see them for what they are.

The story follows Atum Vine, your average 700-year-old demon, who looks just shy of 30, with a bad attitude and an 8-foot wingspan. To the humans who live unknowingly among demons in a beatup tenement building, Vine is the drug dealer at the end of the hall. But to the demons on the floor, Vine is a procurer of human misery, which demons need to survive. Vine has a foot in both worlds; it’s harder than ever to make a buck these days.

Though evil incarnate, Vine isn’t all bad. Unlike most, he truly believes in the Balance, which prohibits demons from causing the misery in humans they so dearly need. Long ago, it was decided that it was better to feed modestly for a thousand years than feast for a single day. Humans are too unpredictable, too big a threat in the end, and they are all too capable of causing their own misery. All it takes is a little encouragement, which is where Vine comes in.

Life is about as good as it gets, when… everything changes.

Vine’s steady flow of addicts shuts off like a faucet. And the humans in the building suddenly reform their despicable ways. The alcoholic mother stops drinking. The wife-beater stops beating. The skeevy mother’s boyfriend is a model father figure. The Balance is broken, and Vine and the demons around him begin to starve.

Vine consults Cornelia, an interpreter of signs, fortune teller in the demon world and guardian of the Balance. Together, they discover that the phenomenon is localized, extending only to the humans in the tenement building. Cornelia reasons it is a curse. Vine believes it is a vendetta against him by a drug lord named Tarqus, a giant molluck demon with four black eyes and curling horns, who runs drugs out of a demon nightclub. After a standoff, Vine discovers that Tarqus not only isn’t the culprit, but that Tarqus and his gang are starving too.

Not knowing who to trust and running out of time, Vine continues the investigation, thinking now it must be one of the very demons starving back at the tenement. His inquiries cause conflict and lead nowhere. His best suspect ends up starving horribly to death. The other demons want to attack the humans, and one tries, but it is no use. The victim’s smile never fades, the wounds heal instantly, happiness abounds, as if the attack never happened.

Cornelia consults an oracle and decides the Balance in the building must be restored by wholesale slaughter of the humans, beginning with Sara, an 11-year-old girl who trusts Vine. And it must be Vine who kills her. Such a betrayal perpetrated on such an innocent human will break the spell the humans are under and their restored fear and misery will nourish the starving demons.

Faced with killing the only innocent human he’s ever known, Vine finally rejects his own nature and fights against his own kind in order to save Sara. He is unique in the Universe, a demon with a conscience. He feels he has evolved, if only to author his own extinction. But evolution is a painful process. And once Sara is safe and the demons in the building are vanquished, Vine discovers he has been betrayed by the most unlikely character of all. He was a pawn the entire time in a larger plan, one that threatens more than his tenement building, but threatens the world, human and demon alike.


Plus check out the original short film based on the comic “Fire City: King Of Miseries”.