The Road Trip Nightmare That Is “Dead Stop”


Just in time for the summer break when thousands of young people will be pooling their funds and hitting the open road for than one ultimate bonding experience before they part ways is this nightmare road trip flick. One of the scariest and coolest urban legend stories which has spawned from such beginnings as “Texas Chainsaw Massacre” and “The Hitchhiker”. This picture looks poised to continue the horror of possibilities that can befall a group of friends when they decide to head across country! 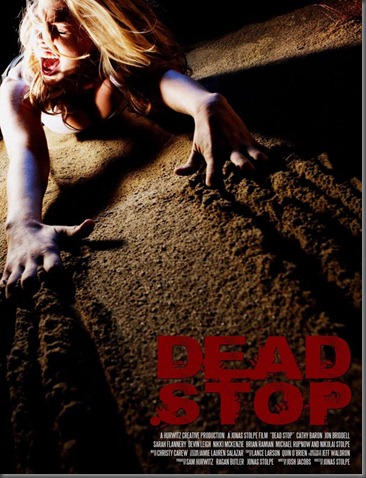 From the Press Release
Big Screen Entertainment Group (PINKSHEETS: BSEG) is pleased to announce the acquisition of foreign sales rights for "DEAD STOP," an exciting, suspenseful thriller from filmmakers who've worked on "THE HUNGER GAMES," "ALICE IN WONDERLAND," and "SAW III, IV, V & VI."
"DEAD STOP" is about a group of teenagers who set out on a ski trip only to have their vacation thwarted when their van breaks down in the middle of the California desert.
One by one, the teenagers mysteriously disappear. With limited water and food supplies, they must make a choice to stay in the van or take their chances going out into the desert to look for help.
"We're extremely excited to share 'DEAD STOP' with audiences everywhere. This project has been a labor of love from the beginning and Kimberley Kates and the rest of the team at BSEG are exactly the kind of passionate, energetic sales team that we strive to collaborate with," said director/producer Jonas Stolpe.
"DEAD STOP" was produced by Sam Hurwitz and Jonas Stolpe, directed by Stolpe.
"With Sam and Jonas' experience on big budget films, we are thrilled about this new movie and the nail-biting suspense they have created," stated BSEG CEO Kimberley Kates.
Sales for "DEAD STOP" will commence at the Cannes Film Market May 16th, which attracts buyers from all over the world. BSEG executives are pleased to be attending this prestigious market.