My Review Of "Clyde Cooper" 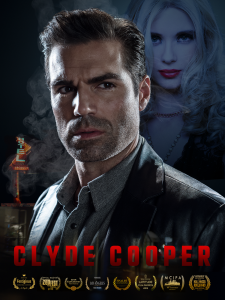 Jordi Vilasuso plays Silicon Valley private detective Clyde Cooper. Hired by a tech investor to find a missing woman, the love of his life, who had mysteriously disappeared, Cooper runs into an odd ring of strange women, and weird characters until he finds much more than what he’s bargaining for.

The film is the typical crime noir character play in full cookie cutter fashion, with a bit of that California neon afterglow. The story has all the familiar tropes and archetypesee you expect to find in P I melodrama. The brooding mancho detective, a parade of eccentric,  mysteries suspect and side pieces, and a puzzle to put together.

The acting in "Clyde Cooper" is decent, albeit  forgettable with Jordi Vilasuso being the only real character that comes alive both in writing and onscreen. Even with the stereotypical cliché attributes,  and misogynistic attitude,  he still is commanding in his scenes.  Plus he delivers such dialog cheese like a pro.

The film stays at a pretty even pace - slow burn. The action never really amps up to anything much, actually the energy set forth in the opening scene is lost in the first thirty minutes,  and is never recaptured. There is a quality reveal at the end that manages to keep the element of surprise right up until it is shown. Overall "Clyde Cooper" , although told nicely with good production value, is slightly disappointing, but give it a once over. (2.5/5)
Posted by A Southern Horror Fan