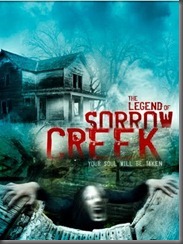 “The Legend Of Sorrow Creek” tells the story of four friends returning to a childhood summer place in the woods for a weekend of fun. This film was directed by Michael Penning and stars Christina Caron, Michelle Caron,  Michael Penning and Jon Deitcher. “Sorrow Creek” comes courtesy of Gravitas Ventures/ Brain Damage Films and was released in 2007.

This is a classic horror story that is reminiscent of early 80’s horror with a touch of “Blair Witch” thrown in, solely on the feel of of the cinematography of this film only. Beyond that there is no comparison between the two movies. This film managed to be scary and intense without the need for a found footage approach. It is a quality that a lot of indie horror projects lack. The raw grittiness of this movie adds to the eerie surroundings and story.

The Legend is a dark and evil tale that draws you into the setting almost instantly. There is a sense of danger just from the scenes of the forest around the ruins that spills over into the cabin were most of this films horrors take place. “The Legend Of Sorrow Creek” is actually one of your better low budget horror movies that actually delivers the scares. I purchased this movie on a whim and thankful to have done so. It is a really great story that actually deserves respect and many sequels.