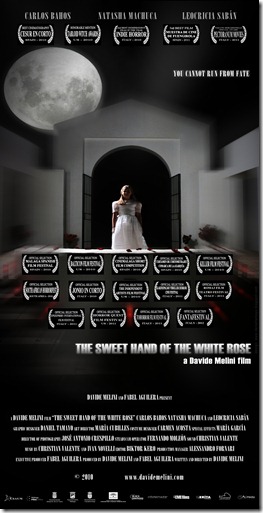 Davide Melini’s “The Sweet Hand Of The White Rose” is a gothic tale of tragedy with a very clear message. The story follows two very different lives that collide in an instance of tragic misfortune. Released in 2010 this short film has won several awards among which Best Cinematography at "Cesur en Corto" (Spain, 2010) and 2nd Best Independent Film of the Year at the festival "Indie Horror" (Italy, 2010) where bestowed upon the film. There is a quality of controlled purpose in the way Davide Melini tells this haunting story. From the first moments as the music begins until the very last scene the dark and ghostly tale sends a clear message to the viewer about the fatal outcome of bad decisions many around the world make while on the roadways. “The Sweet Hand Of The White Rose” is a very poignant warning about the dangers of careless driving that is very true to today’s modern life. The consequences of which can be  felt by the many roadside memorials that decorate streets and highways around the globe. The story is fresh and told in a very creative manner so that the message doesn’t come across as preachy but sets a very heartfelt tone of urgency. This short is a classic tale that speaks both personally and generationally while maintaining an original concept that unfolds beautifully from start to finish.