Trailer Released For Chat Based Horror “The Den” 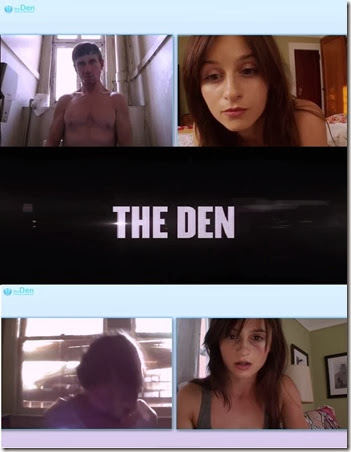 Check out the trailer for chat based nightmare scenario “The Den” . IFC Midnight brings the modern horror story to fans on March 14th through VOD. The film is directed by Zachary Donohue and stars Bill Oberst Jr., Melanie Papalia, David Schlachtenhaufen, Matt Riedy, Adam Shapiro. Based solely on the trailer and promo stuff for “The Den” the film looks pretty cool. There isn’t but in the trailer that would suggest that this film is breaking new ground but it does hint to the fact that Donohue and all involved brought their game to the project. The only thing that would kill it is if the chilling webcam death scenes aren’t portrayed convincingly, that –or weak dialog. As it stands now I am eager to check this one out.


A young woman studying the habits of webcam chat users from the apparent safety of her apartment witnesses a brutal murder online and is quickly immersed in a nightmare in which she and her loved ones are targeted for the same grisly fate as the first victim.