Release Date Set For “Death Do Us Part” 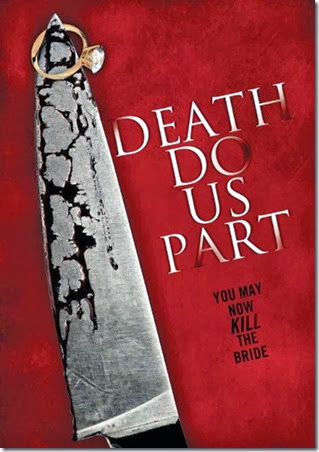 A release date has been set for the horror film “Death Do Us Part” directed by Nicholas Humphries. The film is slated for a theatrical and DVD release on April 15th 2014 courtesy of Anchor Bay Entertainment. “Death Do Us Part” stars Julia Benson, Peter Benson, Emilie Ullerup, Christine Chatelain, Kyle Cassie, Benjamin Ayres, Dave Collette, Viv Leacock and Aaron Douglas.

Kennedy Jamieson, a wealthy socialite, has waited her whole life to have the perfect wedding. Engaged to the charming Ryan Harris, the young couple is just a week away from the big day but hasn't had a chance to celebrate their respective bachelor/bachelorette parties. Ryan's best man Chet books a remote cabin in the woods to throw them a 'Jack and Jill' stag that they'll never forget. Out in the middle of nowhere, things take a horrifying turn as members of the group are brutally picked off one by one. What started out as a celebration quickly descends into a bloody nightmare. Friendships are ripped apart and accusations fly in this blood filled psychological horror with a whodunit twist.


Press Release:
On April 15, orange blossoms will be replaced by bloody roses when Anchor Bay Entertainment releases a story of shattered trust and broken vows: DEATH DO US PART, available on DVD for an MSRP of $19.98.

From writer/producers Julia Benson, Peter Benson and Ryan Copple, the film was nominated for three Leo Awards and directed by award-winner Nicholas Humphries (SCREAMFEST, Best Short Film: The Little Mermaid). DEATH DO US PART tells of two people on the threshold of beginning a new life together: a threshold that turns into a precipice of death!

Kennedy Jamieson (Julia Benson, “STARGATE UNIVERSE,” THAT BURNING FEELING) has waited her whole life for her perfect wedding. Engaged to the charming Ryan Harris (Peter Benson, “THE KILLING,” “ARROW”), it looks like her dream is about to come true. Except for one thing – the young couple hasn’t had a chance to celebrate their respective bachelor/bachelorette parties. Ryan’s best man, Chet (Kyle Cassie, “TRUE JUSTICE,” LOST BOYS 2: THE TRIBE), books a remote cabin in the woods to throw them a “Jack and Jill” party that they’ll never forget. It doesn’t take long before things take a horrifying turn as members of the group are brutally picked off one by one. Kennedy and Ryan had planned for the celebration of a lifetime – but how long will that lifetime last?

So prepare for a deadly reception from where there is no escape; not until ‘Death Do Us Part’!

Special Features:
Death Do Us Part: Behind The Scenes