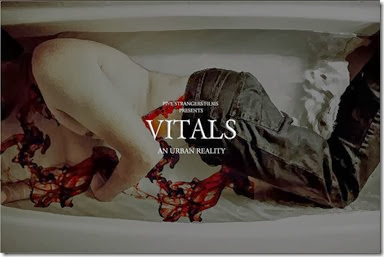 The old legend of nightmare organ harvest has been around forever-since the classic age of storytelling I would suspect, although it does seem to be more attributed to the modern era. Anyway before I ramble, back to the chilling tale at hand. Organ harvesting is the macabre subject to be featured in Marc Morgenstern’s film “Vitals”. “Vitals” has Morgenstern as producer, writer and director of the modern spin on the urban legend that will star Tim Russ, Christopher Showerman, Charlene Amoia, Claudia Wells and Sachin Mehta. The film will combine many fearful notions such as abandonment, fear of physical violation and foreign abduction. All written from a Hitchcockian aspect in style and vision.

When a man, an unassuming electrician wakes up in an abandoned Mexican motel room in a tub of ice and his kidney missing, he knows he only has a certain amount of time to find help.

With his wife being held in the next room. Using his skills as an electrician and the items available to them from his wife's purse, they must beat the clock and escape before the members of the organization return and harvest the rest of their organs.