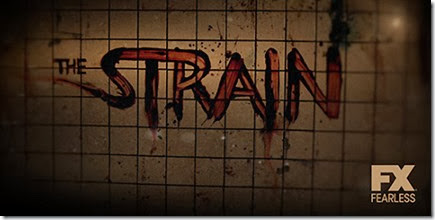 Schrier and Grad said, “We could not be more excited to be moving forward with Guillermo, Carlton and Chuck on The Strain. This is an epic story with stunning visuals and remarkable acting. The Strain totally reimagines and reinvents the genre.”

“The Strain books are near and dear to my heart and now, Chuck and I have the blessing of a partnership with Carlton and FX that holds great promise,” said del Toro. “Working with FX has yielded an amazing experience with total creative freedom and support.”

Cuse added, “Working with visionary filmmaker Guillermo del Toro and the team at FX has been a dream come true for me. Guillermo’s epic, cinematic pilot for The Strain starts a chilling and compelling story that will upend everything you thought you knew about vampires.”

The Strain is a high concept thriller that tells the story of Dr. Ephraim Goodweather (Corey Stoll), the head of the Center for Disease Control Canary Team in New York City. He and his team are called upon to investigate a mysterious viral outbreak with hallmarks of an ancient and evil strain of vampirism. As the strain spreads, Eph, his team, and an assembly of everyday New Yorkers, wage war for the fate of humanity itself.