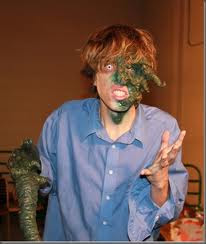 In an interview with Undead Brain recently Brian Shiavo described “Lifeform” and how it the idea came about. More importantly he shared some images from this little creature feature. Check out what he had to say below.


“The idea came out of my fascination with genetic manipulation — it really is the evil genie waiting to leap out of its bottle and bite us on the ass. The real life horrors scientists are probably creating out of our DNA even as we speak will make anything Giger can come up with pale by comparison — and that scares the hell out of me. Then I read about a tiny species of jellyfish that is basically immortal — Turritopsis Nutricula. It can reverse its own aging process and return to a youthful polyp stage when living conditions become difficult, in order to survive — its cells are in flux. I thought: what if a person had this ability? Imagine where that could take us. With that as the basis, I came up with the concept of Lifeform” 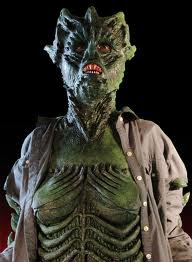 “Schiavo continues, “basically it’s about a scientist that creates transgenic human/animal stem cells that can become anything, in order to save his dying wife. He isolates the gene for transdifferentiation from jellyfish DNA, places it into a human stem cell and injects it into her. Of course she’s saved, but … she becomes a creature that can alter her shape to protect herself. She can grow spikes, tentacles, gills, claws, whatever the situation calls for. At the same time, her intellect becomes subsumed by the animal instinct to survive — and just a few errant cells from her body could doom the Human genome forever.”


read the rest of the interview at Undead Brain.
Posted by A Southern Horror Fan