Smile No More by James A. Moore 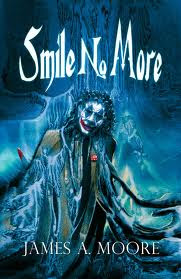 There's nothing quite like a circus. The Carnivale de Fantastique is an acrobatic and musical phenomenon, a show based on the legends of a circus that vanished mysteriously half a century ago. Every season the numbers grow, the merchandising expands and the ticket sales explode.

This year things are a little different. This year the star of the show was murdered and shipped to the next city in a cardboard box. This year the acts are running into all sorts of troubles, and even the police and the F.B.I. are trying to figure out what's causing all the troubles.
Once upon a time there was a kid named Cecil. He ran away, joined the circus and then got murdered for his troubles. Fifty years later, he clawed his way out of Hell, found the people who killed him and his circus and had his bloody revenge. Since then he's been trying to find something to do with his time and now he's heard about the Carnivale de Fantastique, a show based on the disappearance of the circus he traveled with. Of course it's not a traditional circus. This one has acrobats and dancers and actors and a story. It's only missing one thing and it's just not funny. When in doubt, send in the clowns.