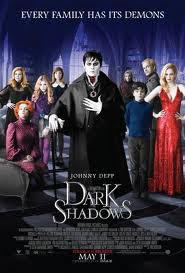 “Dark Shadows” tells the story of Barnabas Collins, an Industrial generation heir to fortune in the family business of fishing. He is also unfortunately the victim of a woman scorned, who is a witch with a power strong enough to curse him for all eternity. Which she does gleefully and sadistically. She also takes her revenge on the Collins family after locking Barnabas in an iron coffin.
This story is adapted from the groundbreaking 60’s soap opera “Dark Shadows” which later after a large cult following was revamped in the 90’s as a nighttime drama mini-series which elaborated on the original concept somewhat. Now for this new reboot to the story which is a great story worth revisiting ever twenty or some odd years but nothing that needs to be over zealously done to the point of destroying a great historical concept. Which brings me to my thoughts on Tim Burton, and to be honest Johnny Depp’s vision of the franchise.
This telling has Barnabas coming home to Collinwood Manor during the most awesome period in American history, the year of my birth -1972. That is just one year after the original soap ended its sweet run on television. So for that I found this story to be almost inventive. Sadly though trying to keep with somewhat truth to the drama they really should have went back even further, maybe 1969. Seeing as how other than a few nods to the original story this film veered far from the soap and the mini series 1991 revamp.
All that aside I found this story entertaining in away only Tim Burton can entertain. There are moments when the story actually creates nostalgia without feeling redundant. By that I mean most remakes are okay in theory but if not an original take then they become boring and half way through your thinking of what else you may be missing at that moment. This story kept my attention in that respect. There were times that were slightly faint even though you could tell they were meant to be cinematic arcs. Like when David’s Mother’s ghost leads Victoria through the halls of Collinwood Manor the scene kind of felt pointless to me. There were a few scenes that had that affect on me in this movie. Yet there were plenty of scenes that made me laugh and both made me remember the first time I discovered the amazing soap opera when for a brief moment they replayed this spectacle on television once more during the 80’s in celebration of its cult fame.
Now back to Tim Burton’s version. For me this was a 50/50 film. The part I loved most about this is that it maintains his brilliance as a whimsically dark story teller. Yeah not as great as “Edward Scissorhands” but still better than “Alice In Wonderland” for me. The thing most irritating was the complete move away from the core character traits of these crazy people and the barely there original concept made me long more for the soap opera than my enjoyment of this movie held me to the screen. Does that make sense? Anyway if you’re a big Tim Burton fan and have no care for the dated soap version then this is great, I can find room in my heart for both. If however you’re a “Dark Shadows” original fan then this is gonna do nothing for you if there is no Burton-istic pulse in your vein.