News About ‘Being Human’ Series Five On BBC 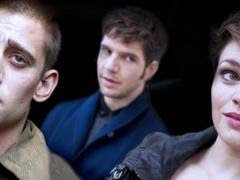 I thought for sure that I would hate series four of the British original ‘Being Human’ after Nina, George, Mitchell, and sadly enough Annie all departed officially from the story. That was not the case. The new cast has found a spot in my supernaturally seduced heart with the witty and intense drama. Now we are anticipating the next series and according to the ‘Being Human’ blog site there will be more “Bigger, better, bolder, braver and definitely more terrifying things” coming the trio’s way. However we are insured that the show will keep a witty and smart site just as the previous series’ did.

Also producer and Being Human legend Phil Trethowan is moving into the role of Grand Overlord for season 5 – or Executive Producer as it’s more formally (and less frighteningly) known. Shooting is planned for late summer and as always Britian gets first sight before the series comes State side on BBC America.
Posted by A Southern Horror Fan