Trailer Released For Thriller “Quite A Conundrum” 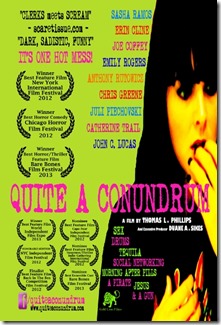 “Quite A Conundrum” is a dark comedy thriller that is truly award winning and mind blowing. The film is intense and chilling in it’s exploration of humanism and character study plot. Written and directed by Thomas L. Phillips and starring Sasha Ramos, Erin Nicole Cline, Emily Rogers, Anthony Rutowicz, Joe Coffey, Chris Greene, John C. Lucas, Juli Piechovski, Catherine Trail-“Quite A Conundrum” is really a must see Indie flick. Check out the trailer that has dropped for the film below.

Sex, Drums, Tequila, Social Networking, A Pirate, Morning After Pills, Jesus And A Gun…It’s One Hot Mess! It's Hilarious, Dark, Sexy, Twisted, and Sadistic. It's Quite A Conundrum.

It should have been just a normal day of sex, fun, alcohol, hormones and debauchery for Tabitha and Mimi, two twenty something’s who care about nothing but themselves and what chaos they can cause.

But that so-called normalcy gets tossed out the window when an unexpected and devastating event occurs at a nighttime pool party. As the alcohol begins to wear off and the body count rises, all hell breaks loose and there is no going back.

If that's not spicy enough for your tongue, then shoot in a splash of the old pervert Marc and his crazy unhinged wife Lola, and then toss in the Bible belt thumping Jesus Freak Thelma, and it gets a little more than crazy, dangerous, insane and scary, in fact it's chaotic debauchery personified.

You'll want to avert your eyes and ears away at every possible turn, but that sadistic, dark and devious part, way down, deep inside of you, will not allow you to look away.