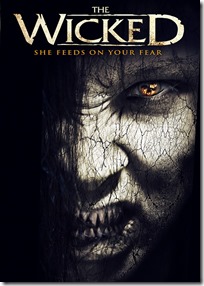 “The Wicked” is a supernatural horror film that is part urban legend, and part ghost story. The movie was directed by Peter Winther who makes the jump from television to feature film with this wicked little treat. It tells the story of a home hidden away in the woods, that if you throw a rock at it and break a window, a witch will come and kill you. That is the urban legend part. One that is as classic as it is contemporary. A place where cruel acts transpired and a curse that will tear any soul who dares test it. Those legends are very prevalent in today’s culture. Which is why I found this film as traditional as I did modern and fresh. True there is not much within the film that hasn’t really happened before, or been told in other horror films of the past, but the movie gave a thrilling and entertaining nightmarish tale, that renewed my faith in good, fun horror stories- like the ones I grew up on.

“The Wicked’ keeps with a very clean and tight story that is brought to life by believable actors who, at times, make you want to see them die on film-well a few of them anyway. I also found the evil supernatural entity of the witch very dark, and horrible, so I didn’t really want her to prevail in the end. She was pretty vicious. The directing for the film manages to keep your attention with some pretty creepy concepts, and point of view moments, that allows the movie  to be dark without being too dark. There are some cliché moments within the movie that takes away from the suspenseful action scenes, the snag that befalls a lot of movies like this. However “The Wicked” did make me jump quite a few times, and even though the CGI was a bit distracting when used, the kill sequences where still very well done and entertaining. Overall I really enjoyed this film and found the witch to be a true classical interpretation of an evil supernatural witch. If you enjoyed movies like “Darkness Falls” (as I did) then this film is perfect. I do have to say that the film is not some modern expressionist’s attempt to get real, and gritty with a “raw” horror story, that feels more like grindhouse experimental filming. It is a traditional horror film that keeps with a true, classic concept of ghost story/urban legend. I liked this film more than I liked “Darkness Falls”.
Posted by A Southern Horror Fan