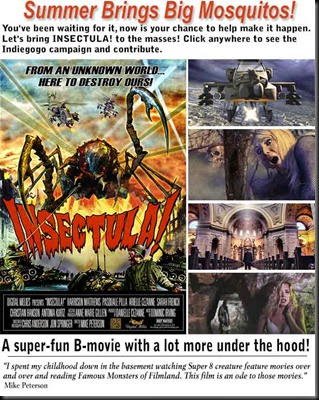 Creature-feature and retro sci-fi “Insectula” has kicked off a crowd funding campaign to raise the funds needed for post-production. The film is part practical effects, part CGI and 100% b-movie madness. Directed by Mike Peterson, “Insectula” blends horror and comedy in a story that has a giant alien insect that comes to earth to feed, drawn in by the CO2 emissions.

The crowd funding is taking place over on Indiegogo. The funds will go toward scoring, 5.1 mixing, final grading, finalizing, and packaging for markets. “Insectula” stars Arielle Cezanne, Harrison Matthews, Pasquale Pilla, Sarah French, Yasmin Moon, H.T. Altman, Nicole Kruex, Joel Thingvall and Antonia Kurtz. Also keep up with the film’s latest on the “Insectula” blog.  The film is described as a celebration of the classic studios like Hammer, AIP and Toho.