Crowd Funding Kicks Off For Animated Film “Mountain Of Madness” 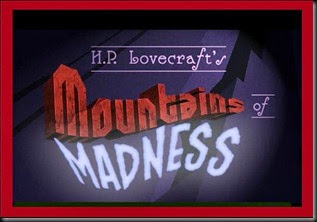 "Mountains of Madness" will be an animated feature film based on H.P. Lovecraft's novella "At the Mountains of Madness". This novella is considered one of Lovecraft's greatest and most cherished works, but it has never before been realized cinematically. The use of classical animation allows the grand concepts, gruesome violence and colossal set pieces of this epic story to be realized by a relatively small team of artists. Modern advances in the technology of digitally assisted animation allows this independently-minded film to be produced for a modest budget.

“Mountains Of Madness” is being directed by Stephen Sloan and is being produced by Upon Animation and Lux Digital Pictures. The film’s crowd funding campaign is ongoing over on Kickstarter.com. The screenplay is co-written with Steven Wintle, Peter Colley who join Sloan in adapting Lovecraft’s novella. Head over to the campaign page to check out all the rewards for funding “Mountains Of Madness”.

Over the years there have been numerous attempts to bring the Lovecraft novella to the big screen. It is a terrifying story about a doomed scientific Antarctic expedition that is hunted down and slaughtered by horrific creatures unleashed from the frozen wasteland. Its period, locations, horrendous monsters and unique story have presented significant challengers to filmmakers trying to make live action adaptations. The feature film version of this epic story remains buried – until now.

“Developing Mountains of Madness as an animated project seemed like a natural idea to me,” said Sloan. “The extraordinary settings and vivid Lovecraft creations are well suited to be brought to life through digitally assisted, classical animation.”

In 1930, a team of researchers traveled to the southern end of the world in an attempt to discover the unknown history of our planet. They found a series of gigantic, alien-looking fossils resting in an ancient cavern. The scientists believed they discovered an unknown species of prehistoric animal. Soon, however, they realized that those creatures were far from extinct and more dangerous than any primeval predator.

When the scientists failed to return, a search party was dispatched. The rescuers pursued a trail deep into the Antarctic tundra where they discovered a titanic mountain range that hid a sophisticated pre-human civilization. In the deepest recesses of the city, they learned the shocking fate of their friends and worse: the horrifying truth about the origins of mankind.

Hunted by supernatural creatures of infinite evil and sinister intelligence the men struggled to escape the bounds of “The Mountains of Madness”.