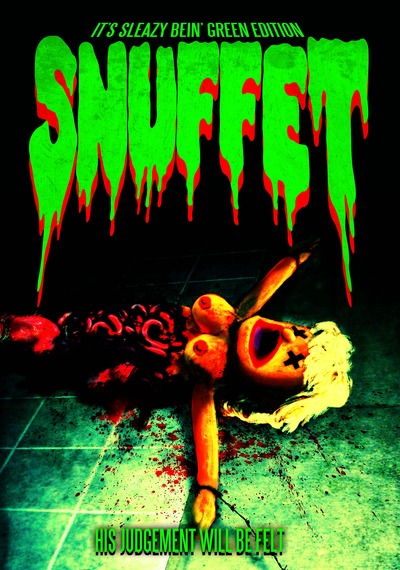 It has been well established that Dustin Mills is a special kind of twisted. He has found a niche market in creating stories that are ever bit as dark as giallo and just as satirical as any camp film. His films are nothing, if not original and creative. Now Mills has shown that twisted humor that makes him known in the indie community with “Snuffet”, the first ever puppet snuff film. Check out the trailer below.

Snuffet is a found footage snuff film with a psychotic twist. The victims are all puppets. This is an out and out sleazy gorefest, where Mills asks the question- Have you ever wondered what it might be like to watch a masked maniac reach into the chest cavity of a screaming puppet and extract his tiny little heart? Well, now we will all know the answer to that one.

Imagine a world exactly like our own except for one crucial detail... puppets are real and they coexist with humanity. Just like our world there is a seedy underbelly beneath the surface. Puppet racism, puppet hate crimes, puppet civil rights issues, and of course puppet serial killers. Human serial killers who hunt puppets to be specific. Our story follows a maniac's video diary as he hunts, mutilates, dismembers, and violates poor hapless Puppet Americans. Watch as they scream, bleed, and beg for mercy as a masked psychopath dismantles them one stitch at a time.