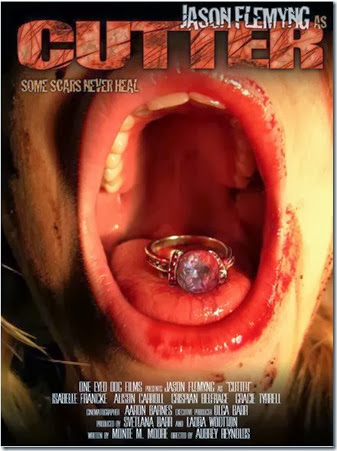 A new indie slasher flick, “Cutter”, has began a crowd funding campaign to help support the projects production. The campaign is ongoing over at Indiegogo. The crowd funding page has an insane amount of detailed information about the project and the team behind it that warrants checking out as well as some pretty tight perks in exchange for your support. “Cutter” is being directed by by Aubrey Reynolds and Jason Flemyng, Isabelle Franke, Allison Carroll and Gracie Tyrrell. The film comes from One Eyed Dog Films and is being shot in the deep south. Check out the teaser trailer below and read the synopsis, then go check out the campaign page and be sure to like them on Facebook. (note that under the teaser I have added the links to the film’s various locations on the web.)

When Amanda and her friends discover a hidden boat in the secluded bayou, they think they have found the ideal party spot. Unbeknownst to them the boat is home to Cutter, a disturbed loner with a tortured past and a body covered with self-inflected scars. Cutter feels the need to defend his home against the unwanted visitors who fight back...but are brutally dispatched and added to his macabre collection of bodies in his meat locker. When the police arrive to investigate the missing students, they will be put to the test, and tempted by lust, greed and the lure of forgotten fortune.