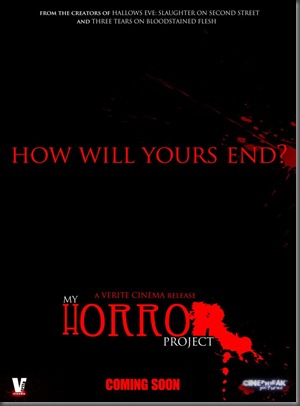 The official teaser trailer is online now for “My Horror Project” and from what I see it is gonna be one killer flick. An experiment in fear from the creators of HALLOWS EVE: SLAUGHTER ON SECOND STREET and THREE TEARS ON BLOODSTAINED FLESH. Directed By P.J Starks and written by Jacob Bilinski and P.J Starks.

Grant, a documentary filmmaker, along with his trusty cinematographer David and two Producers rent an alleged demonically possessed home with a very sordid past. While the Producers are hoping to cash in on what could be the next supernatural reality phenomenon, Grant has other plans. A harsh skeptic, Grant plans to make an over budgeted spook house flop to prove a point; that ghosts don’t exist and to shatter the mythos of the “haunted house” once and for all. It isn’t long before Grant begins to discover the malevolent secrets hidden within the walls of the decrepit Victorian manor. As the mystery unfolds and the body count rises Grant is forced to make a deadly choice; let his film die or finish what he’s started and see this project to the grisly end