“Exit Humanity” looks to be one of the better zombie flicks to come out of the most recent swarm of undead films. Great production with kick ass zombie effects against a new cinematic spin happening in the horror genre, historical-fiction horror. It is one of the best twists in the genre to come in a great while. Thanks to films like “Abe Lincoln” (vs Zombies & Vampire Hunter), “Pride Prejudice and Zombies” and “Nazi’s At The Center Of The Earth” which are all soon to be great cult classics. “Exit Humanity” is set to be just as epic, and thanks to Bloody Disgusting Select it will soon be available on VOD and DVD. June 19th to be precise.

Check out the trailer for “Exit Humanity” and judge for yourselves. The flick is directed by John Geddes and stars Mark Gibson, Jordon Hayes and Dee Wallace. 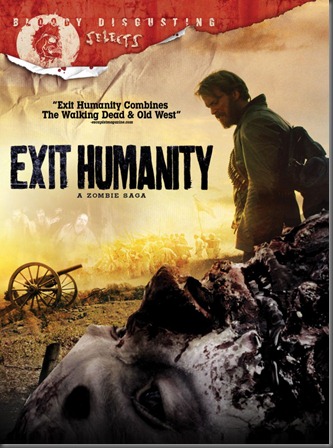 “How does a man deal with the loss of everything meaningful in his life, and the loss of mankind’s humanity amongst chaos and despair? Set in 1870’s Tennessee, Exit Humanity is the legend of Edward Young’s horrific and dramatic journey through an unexplainable outbreak of the walking dead to lay to rest the most important thing in his life, his son’s ashes. The bleak post-Civil War era backdrop highlights the severe divide that the United States was facing, and the true loss of hope that so many felt during this period in history.”