My Review Of "Inhumanity" 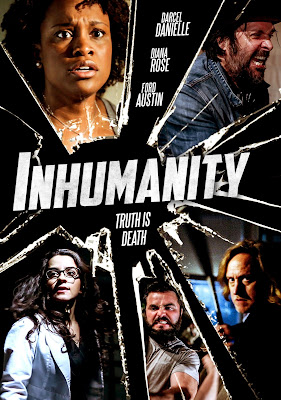 "Inhumanity" is written and directed by Joe McReynolds and stars Darcel Danielle, Diana Rose, Ford Austin, and Leviticus Wolfe. It is a neo-noir full of throttled performances and dire consequence, both in story and in action.

Narrowly escaping death at the hands of a notorious serial killer, Jessa Dixon awakens from a coma to learn her father committed suicide. Unconvinced, she investigates the suspicious suicide and uncovers a dark corporate conspiracy involving the police and the psychotic killer that almost took her life.

"Inhumanity" relies heavily on its neo-noir style, building on a 'Big Guy' mentality with cult film mayhem. The story is part crime thriller and part psychological melodrama. Initially I got a "Seven" familiarity from the energy and style of Joe McReynolds story telling. There is a lot that is going on in this one , and the sporadic jumps between scenes, shaky cinematography can atest to it.

The cast do well to their commitment to the story. They embody their characters with grandiose nature. At times giving honest, compelling performances, and at other times campy falderal. All playing out as sporadic as the plot point jumps and sketchiness. It isn't all bad, but it isn'tall 'so-bad-so-good' either. At times it all just under minds McReynolds' intent and pulls focus from the film's momentum. Plus side- Leviticus Wolfe is a big draw to "Inhumanity" as Six Pack Sam.

The effects are, for the most part, well-produced, low budget mix of blood, violence and pulp mystery. Shady dealings, crime-action, and frenetic concepts help to move toward that "True Grit" attitude. Again, at times the execution is flawless, other times it all falls flat or is over-shadowed by the over-zealous acting. (2.5/5)