My Review Of ‘Alien Abduction” 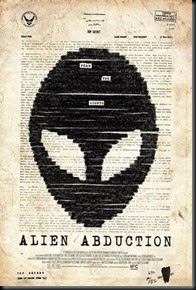 “Alien Abduction” is a found footage sci-fi/horror film directed by Matty Beckerman and starring Katherine Sigismund, Corey Eid, Riley Polanski, Jillian Clare in a story that a blend of documented family adventure through the eyes of a camcorder, and the true unexplained phenomenon around Brown Mountain in North Carolina. The family struggles against an invasive and brutal alien threat while on vacation.

This film is pretty intense with a standard start that seems to kick off most found footage film. The drama and suspense comes from the fact that all you see is what the camera shows you. The audience perspective is through the eyes of the youngest family member who is practically attached to his cam in the movie. Not knowing the full surrounding, or greater understanding of the environment, actually creates suspense and intensity in “Alien Abduction”. That is a cool trick when it works, a lot of films fail to capture this element fully, “Alien Abduction” creates a tense atmosphere filled with melodrama. The middle of the film sort of drags and the added character trying to help the family actually takes away from the momentum a bit. That is just the middle though. The last act kicks in with the expected benchmarks that service found footage films well.

The effects and soundtrack in “Alien Abduction” is hit and miss. The standard gimmicks apply in this film as in most films in this genre. Sometimes it works perfectly and creates some chilling moments. Most of that is due to the heightened drama from the characters and the fact that camera view is limited in found footage. However the action scenes are hit and miss as to being affective. The aliens tend to show a bit ‘fake’ when they are clearly on screen but the times they are only flashed or shadowy creatures in the distance actually gave me chills.

“Alien Abduction” has limited sound effects in order to keep the ‘realness’ of the intent cohesive but the sounds that the camera picks up offer some sudden shock moments that made me jump. To be honest, all alien movies that show this particular alien species creeps me out, as if they are the boogeyman that is really scary. “Alien Abduction” is an entertaining film but it is average compared to most films in the found footage subgenre. The visuals, direction and gimmicks are expected but they work well and this film does what it intends to do- entertain and thrill.
Posted by A Southern Horror Fan