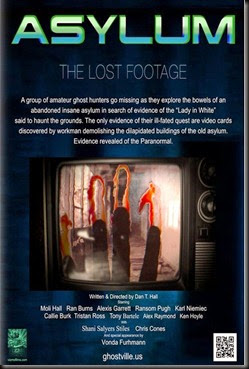 Dan T. Hall’s “Asylum: The Lost Footage” is now available VOD on Vimeo On Demand. The film is the story of a group of amateur ghost hunters who go missing as they explore the bowels of an abandoned insane asylum in search of evidence of the “Lady in White” said to haunt the grounds.

The only evidence of their ill-fated quest are video cards discovered by workman demolishing the dilapidated buildings of the old asylum. Salvaged footage reveals the ghost hunters last horrific moments lost in the underbelly of the madhouse in this chiller from the director of Central State: Asylum for the Insane.