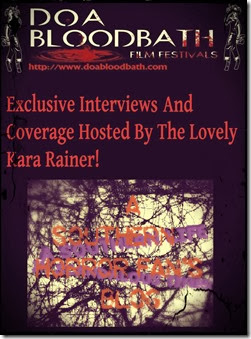 Kara Rainer grabbed this nice interview with “Velvet Vengeance” star Cody Daniel on the red carpet. The film held it’s world premiere at this year’s DOA Bloodbath Film Festival in Dallas, TX. The film’s festival premiere was held this past weekend on October the 19th. “Velvet Vengeance” is directed by Jeremy Campbell and the coverage was hosted by the lovely Kara Rainer for A Southern Life In Scandalous Times. Cody Daniel is a Texas born indie actor who has starred in both film and television series.

“Velvet Vengeance” follows follows a  young woman who is faced with the tragic murder of her brother. She travels to the location of her brothers murder to hunt the killer but little does she know that she is the one that is being hunted. The film stars Lindsay Norman, Jessica Hall , Paula Marcenaro Solinger, Forrest Vickery, Linda King, Elisa Castillo, Cody Hofmockel, Cody Daniel, Amanda Marie, Laiken A. Thompson and Carl “The Coach” Bailey. “Velvet Vengeance” opened to a packed crowd to some great feedback.