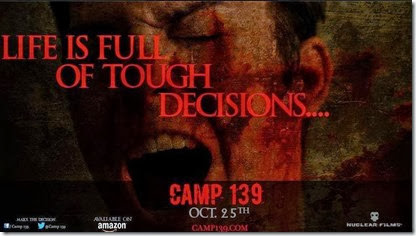 Check out the official trailer for “Camp 139”. The film is directed by Matt Adams and with a tag line like “drug fueled camping trip goes to hell” how could you not get excited about this film. “Camp 139” stars Victoria Paege, Ricardo Andres, Shane Dean and Greg Bronson. The film is available on the website’s createspace link. It hits shelves officially on October 25th, 2013, in time for the Halloween season!

A drug fueled camping trip goes to hell when a militant killing machine stalks four teens through the wilderness, luring them toward an abandoned Army hospital.


Stacy (Sarah Wilson) and Brandon (J. Lyle Johnson) are pulled away from a weekend of romance when their classmates Haley (Victoria Paege) and Mike (Frank Prell) become captives of The Patient, a perverse medical experiment stemming from the government's post World War II research.

With the help of Mike's slacker brother John (Shane Dean, DEADFALL TRAIL, DEATH FACTORY BLOODLETTING) they locate the hospital, making a last-ditch effort to save their friends - or die trying.