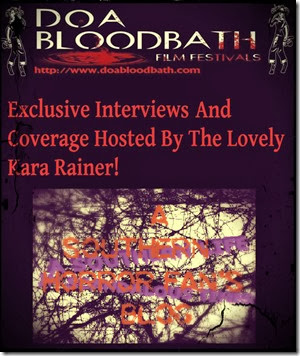 This past weekend was the Bloodbath V  Film Festival in Dallas, TX at the Texas Theatre. The festival is a showcase and celebration of Indie film talent and film fans of the horror community. The festival also held the world premiere for Jeremy Campbell’s “Velvet Vengeance” action/horror film. For the first time, exclusive coverage and interviews for A Southern Life In Scandalous Times are being provided by the lovely Kara Rainer. She spent the weekend stalking, and hacking here way through the indie talent to get the interviews and bloody good details at this years festival.

Check out the exclusive interview that Kara provided with  actor and musician Billy Blair. Blair was born in El Paso, TX and related to the great Edgar Allen Poe, Billy knew what he wanted to do at the ripe age of 5 after experiencing Sesame Street and KISS. He comes from a musical background as well. His great grandfather led his big band during the early 1900's in Mexico performing for some of history's greatest figures such as Pancho Villa.

For his whole life, Billy was dedicated to music and still is to this date. Being in numerous bands, he would experience touring the nation, playing in clubs, theaters, arenas and amphitheaters. Opening for some of the biggest names of rock. This was definitely a dream come true for him. By the mid 90's, Billy decided to add acting into his book of dreams. He signed up for theater at Richland College in Richardson, TX where he'd finally understand the techniques of acting. Getting these techniques he would then get cast lead for a couple of plays, then slowly work his way into film. He's then had the opportunity to act in film with some of film's greatest actors. This was a another dream accomplishment.