“The Wicked” Gets Release Date

Image Entertainment released a press release stating that “The Wicked” will be available on DVD April 30th 2013. Proving once more that wicked witches are fast becoming a trend in horror. At least it seems that way to me. I have seen a good amount of films lately that have brought back the more classical maniacal view of the evil conjurers. 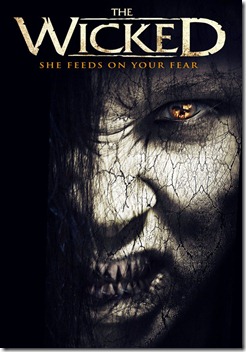 “Image Entertainment suggests you sleep with one eye open as your worst nightmares come to life in The Wicked. A group of curious teenagers decide to seek out their town’s local legend and go on the hunt for a child-eating witch, not realizing they could be her next meal! Directed by Peter Winther, the film stars Devon Werkheiser (Beneath the Darkness), Justin Deeley (“90210″), Nicole Forester (The Double), and Cassie Keller (A Very Harold and Kumar 3D Christmas). The DVD release is set for April 30th with an SRP of $27.97.
Local stories warn that deep in the woods a witch with a ravenous hunger feeds on the flesh of the young. In an abandoned house in the woods, she hunts her victims…and if you try to enter, you’ll never see daylight again. When another child goes missing, a group of local teenagers decide to find out if the urban legend is true. What starts out as a meaningless dare turns into a blood-spattered fight for survival against a mistress of darkness in this unrelenting nightmare from which you may never wake up!
The DVD will also feature “No Soul is Safe: The Making of The Wicked.”