New Trailer Released For “The Legend Of Seven Toe Maggie” 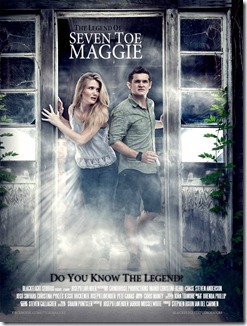 A new teaser trailer has been released for paranormal flick “The Legend Of Seven Toe Maggie”. The film is based on a local GA. urban legend from Cordele, GA. Trust me when I say coming from Georgia there are no shortages of ghost stories or urban legends in the State. This story is about an Indian slave named "Maggie" who was brutally murdered there, with 3 of her toes being severed by her attackers leaving her with only 7. The locals dubbed her "Seven Toe Maggie" and claim her spirit still haunts the land.

This low budget film is directed by Joseph Lavender and stars Chase Steven Anderson (“One Tree Hill”), Mandi Christine Kerr (“Two Naked Men Making A Sandwich”), Josh Sinyard (“It’s Supernatural”), Christina Pykles, and Gregory French as Jonathan. When a group of misfit Paranormal Investigators try to help a local girl uncover the mystery behind a small town's urban legend, they get a lot more trouble than they ever expected. Check out the teaser trailer below.