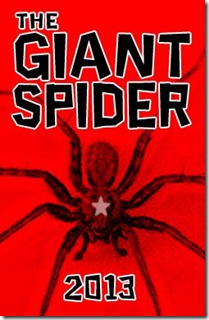 “The Giant Spider” is a low budget creature feature that is totally bringing back all the elements of B-movie awesomeness.  The film manages to utilize and accentuate all those cheesy special effects that were so common in the 50’s and early 60’s horror and sci-fi to create a truly unique revamp of the golden era. Quiet frankly I would rather see these types of effects used more as opposed to the CGI ones common today! Check out the trailer for this really cool flick below. Directed by Christopher R. Mihm and expected to release on May 22nd 2013.

When radiation left behind by atomic weapons testing creates a gigantic killer mutant arachnid, it’s up to a trio of scientists (Mike Cook, Billie Jo Konze and James Norgard), an Army general (Mark Haider), and a newspaper reporter (Daniel R. Sjerven) and his fiancée (Shannon McDonough) to figure out how to stop the hungry beast from devouring the entire county.