Trailer Released For Horror Thriller "After She Wakes" 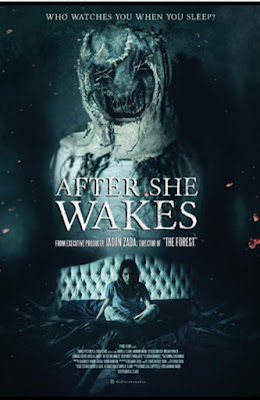 Check out the trailer for upcoming horror thriller "After She Wakes". Gravitas Ventures, a Red Arrow Studios company, acquired the U.S. rights with plans to release the film on VOD in December. It is directed by David A. Clark and stars Hannah Ward (Ballistic), Conrad Goode (Con-air, The Longest Yard), Nicola Lambo (“American Crime Story”, “Will & Grace”) and Micah Parker (“Mob City”, “Vampire Diaries”, “Lola Versus”).


A narcoleptic mother who suffers from terrifying sleep disruptions as she tries to deal with ongoing grief following the tragic death of her infant son.
Her family begins experiencing different episodes of parasomnia including night terrors and sleep paralysis, leaving them unable to move and only able to witness horrific visions. These nightmares become too disturbing as they create a rift in their own realities causing the mother to believe someone or something is watching her sleep every night.