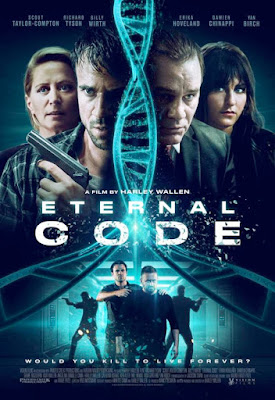 Breaking all moral and ethical codes, a genetic research company has developed a miracle device to sustain human life for the rich and powerful. When the company’s CEO (Erika Hoveland) refuses to approve these illegal methods, she and her husband (Billy Wirth) are kidnapped by a team of mercenaries (Scout Taylor-Compton, Harley Wallen) hired by Oliver (Richard Tyson) to keep them out of the way. Fearing for her parents’ lives, their teenage daughter (Angelina Danielle Cama) must develop an unlikely ally (Damien Chinappi) to save her parents from those who would kill to live forever.

Vision Films and Painted Creek will showcase the world premiere screening of Eternal Code at the TLC Chinese Theater in Hollywood, California on September 4th. It will be released on all major cable platforms and on VOD including iTunes, Amazon, GooglePlay, Vudu, and FandangoNow on September 6th.