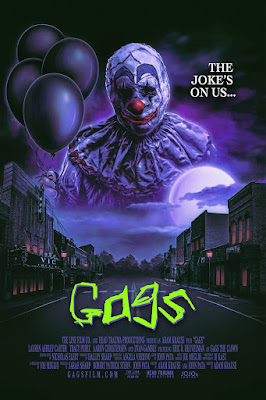 A new trailer has been released for upcoming horror "Gags The Clown". The film is getting ready for a September 3rd limited theatrical and VOD release. It is directed by Adam Krause and stars horror veteran Lauren Ashley Carter.

"Gags The Clown" is inspired by the viral media frenzy and worldwide phenomenon of ‘clown roaming’ sparked by his sixteen-minute short film “Gags” in 2016.

The film unfolds during a single night in Green Bay, Wisconsin when a mysterious clown bearing ominous black balloons appears to terrorize the town. As a local news reporter scrambles to reveal Gags’ true identity and the police attempt to maintain order in a city that is starting to go clown crazy, a group of high schoolers see Gags’ arrival as an excuse to cause a little copycat trouble themselves. Throwing even more gas on this dumpster-fire night, a far-right podcast host seeking law and order decides to live stream his “clown hunt” on social media as the world watches on in horror.