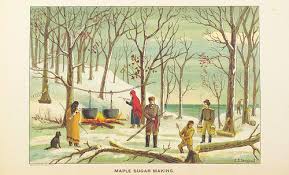 Iroquois Maple Ceremony:
In thanksgiving for the Maple tree and its sugar. Iroquois believe Awenhai/Sky Woman bore the twin brothers Thahonhiawakon/Order and Tawiskaron/Chaos.

The Maple Moon fell around the first month of the spring – early to mid March – in time for the maple trees to give plenty of the wonderful sap for the people to enjoy (Haudenosaunee people lived according to the lunar calendar, counting 13 moons of 28 days each). A Maple Sugar Festival was held in order to thank the Creators. People performed sacred dances and faith-keepers would give thanksgiving speeches, burn tobacco, letting the smoke rise to the world of the Sky Spirits, carrying the gratitude to the creators.

There is a common myth, with many tribal variations, that the Creator originally made life too easy for his People, with maple trees having a syrup that flowed year round. One day, Glooskap (this name has many variations) arrived at a village and found it strangely quiet. No children or dogs came to greet him, the gardens were over grown with weeds, and the cooking fires were dead. He found the villagers lying in the maple grove, with the delicious sap running into their mouths from the trees.
Glooskap had special powers. Using a birch bark bucket, filled with water from lake, he rose above the trees and filled the trees with water until the sap ran thin. Then he encouraged his People of the village with a fiery speech. In this exhortation, he berated them for being lazy, and said as punishment the Creator was going to have the sap run only in the late winter. But, he urged them to take heed that when this happened, they would still be able to enjoy this special sweet, though only at this special time of year.
Posted by A Southern Horror Fan