My Review Of "Blood Hound" 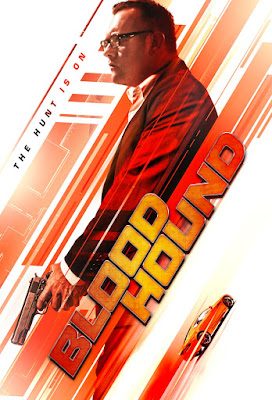 Private investigator Abel Walker along with his cameraman, Jim, are on the hunt for a missing woman. As they unravel the mystery of her disappearance, they become caught in a sick and violent game that will end in murder.

"Blood Hound" begins a bit sketchy. The throwback noir homage with classic p.i narration over video diary cam work made me a bit apprehensive. But- full disclosure- I am kind of hyper-critical when it comes to found footage story telling. Still I did stick with the film, to give Miller's concept a chance. It is a great story idea, a private eye crossing paths with a very scary group and a situation that is deadly beyond the standard case.

The writing does have some moments of strong suspense and thrilling concepts. However there is a lot of the material that should have been re-evaluated or fleshed out more. The acting is decent, even in scenes that don't flow as smooth as they need to. It does get a little boring waiting for the energy and story to reach a level of suspense that says "horror". It takes nearly 50 minutes.

The story pace does amp up. The darker, scarier aspect of the story is entertaining. Still nothing really manifests to truly qualify as horror. "Blood Hound" does reach decent thriller level story telling. A couple of jump scares worked on me. Overall the film falls somewhat short of expectations, but there is enough here to find an audience. Just suspend disbelief and give yourself over to the found footage choice. (2.5)