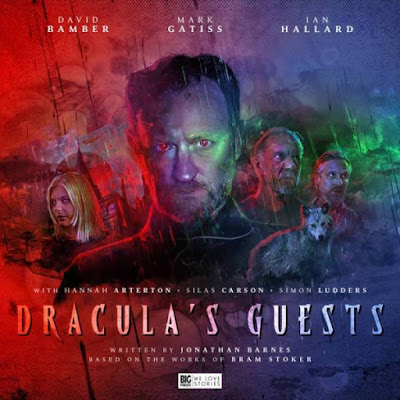 Dracula has risen in new audio thriller 'Dracula's Guest'. Mark Gatiss stars as the Count in a full-cast audio production from Big Finish. It is now available in the UK as a three-disc collector’s edition CD for £19.99 or as a download for £16.99.

Joining Mark Gatiss as Count Dracula are David Bamber as Jeremiah Hart, Ian Hallard as RM Renfield and Hannah Arterton as Sabine.Save money with the Dracula trilogy bundle (including the already-released adaptation of the novel Dracula, and the sequel release due in September 2020, Dracula’s War) for just £53 as a collector’s edition CD box set or £45 as a download.

Transylvania, 1888.
Sitting in his castle like a spider in its web, Count Dracula is setting his plans in motion.
Soon he will travel to England, there to cut a bloody swathe through polite society and pit himself against a dedicated crew of vampire-slayers.
Yet before then there is much to be done. A certain artist must be brought to him and a certain portrait painted. An old tale must be told, drawn from the darkest recesses of Transylvanian history. And in faraway London an honest police detective must be corrupted and set to work in the service of the Count.
The vampire king is making preparations. And his survival will be assured – no matter the cost.
Posted by A Southern Horror Fan