Kristy Swanson Takes On Voodoo In "Killer Under The Bed" 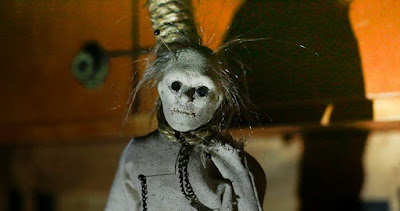 Kristy Swanson takes on killer Voodoo doll in upcoming horror "Killer Under The Bed". Swanson stars alongside Brec Bassinger and Madison Lawlor. The movie airs Saturday October 20th at 8pm on Lifetime. It is directed by Jeff Hare and features the puppeteer work of Bill Johnson and Peter Chavako.

Recovering from the loss of her husband, dentist Sarah (Kristy Swanson) moves her teenage daughters Kilee (Brec Bassinger) and Chrissy (Madison Lawlor) to a beautiful home in a new town. When outcast Kilee finds a creepy Voodoo doll hanging in a backyard shed, she discovers its supernatural powers can make her wishes come true. Soon enough, she’s making her crush fall for her, enacting revenge on her bully, and destroying the career of Sarah’s manipulative co-worker.  When her wishes turn violent, Kilee, Sarah, and Chrissy must enter an epic battle for their lives against pure evil personified in the form of a killer doll!