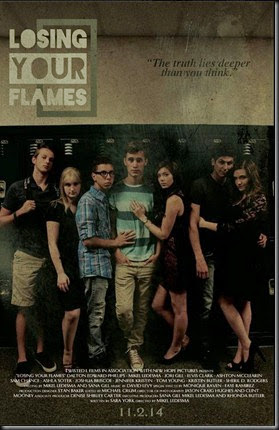 It isn’t often that step outside the horror and sci-fi world to post about a movie. “Losing Your Flames” is one of those times that I gleefully do. The film is a stark character study focusing on an issue that a lot of young people face daily. Bullying, personal identity, love, acceptance, all issues that at one point in our lives we have had reach exceptional highs and disturbing lows.


“Losing Your Flames” is a dramatic short film from Twisted L Films that focuses on Chris Steadman, a young man who is battling an inner war between love and being seen as normal. The southern town he calls home lives, eats, and breathes traditional values, leaving no room for those who don’t fit the mold.

When Chris receives a text from his boyfriend, Greg, word spreads faster than lightning, resulting in his expulsion from the popular crowd, and worse his family. All Chris wants is to fit in. Acceptance is the only thing holding him together, but in bending to the wishes of others, he is losing his flames.

“Losing Your Flames” is directed by Mikel Ledesma and stars Dalton Edward Phillips, Mikel Ledesma, Jori Gill, Elvis Clark. The film is set to premiere in November. Check out the new poster just posted on the film’s Facebook page.
Posted by A Southern Horror Fan