My Review Of “Lost Time” 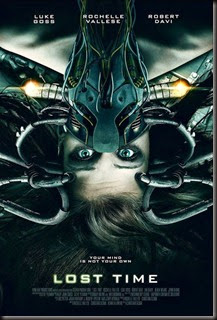 Christian Sesma’s “Lost Time” is a dark, nightmarish sci-fi that stars Rochelle Vallese, Luke Goss, Robert Davi, Derek Mears. Maria Olsen, Jenni Blong, and Chelsea Ricketts. The story blends sci-fi, psychology of fear, and concepts of the supernatural in an emotional tale that centers on two sisters, bonded for life, suddenly separated during trying times by an unexplained event that leaves one sister missing. There is a lost more to the plot that really gives Sesma’s story depth but I don’t want to spoil it.

This is a story that evolves as more of the plot is revealed. As a woman deals with fighting cancer her sister disappears during what is perceived as an alien abduction. Sesma obviously has explored the broader concept of aliens and their “possible” true origins. Blending the spiritual with an emotional trauma, and the awareness of a more sinister construct of our universe, “Lost Time” delves deep into the psychological nightmare and fear that surrounds the mysterious phenomenon of lost time/abduction experience. There is times when some noir permeates the film and reminds me of “Dark City” (not so much in style but attitude).

For me personally, I found the film pulsating with real human emotion, human tragedy, and fear of lost control over one’s destiny. Not only on a science fiction level but a level that is very much grounded in mortality, and confusion. The characters, although at first glance seem two dimensional, are standard paradigms emoting despair and desire for self-preservation. “Lost Time” is a complex story that at times feels a bit too tragic and macabre, but also generates such intense, surreal elements of horror. And don’t get me started on the fact that the story touches on the concepts of inter-dimensional, multiverse concepts. Comparisons between man’s mythology of creation and that of extraterrestrial interference.

The special effects and cinematography in “Lost Time” is stellar, with some truly chilling moments. It is a blend of CGI and practical, both done top perfectly and present the necessary spectacle you need to create the moment. I didn’t find any of them to be cheap or cheesy. The sound effects and instrumental music is pretty “cookie cutter”, it is all sounds we have heard many times over, but they do play well with the scenes, and really drive in the sense of dread that “Lost Time” goes for atmospherically.

Overall I enjoyed “Lost Time”. The story does get a bit heady at times, and may seem confusing as to the true nature of this chilling tale so be aware. Some moments do loose momentum as far as thrills and intensity, but those moments don’t last long. Most of the story stays dark and edgy. This is a more mature, stripped down sci-fi that uses a more toned down amount of CGI and effects to create those elements of fear, or science fiction. I enjoyed the fact that “Lost Time” starts as one kind of alien-esque story but then evolves into something different and far more sinister. The ending is a bit confusing and seems to reach for that final conclusion, but it is creative.
Posted by A Southern Horror Fan